Tea I save for this time of year, because now is when it tastes best.

The first of my beloved fritillaria meleagris, looks particularly fetching after a storm.

A spot in the neighborhood which feels enchanted.

Really I am done with Thanksgiving. I talked to my husband and kids about it, and they were surprisingly enthusiastic about dropping it. We decided to have an autumn celebration of our own on a different day, and it wouldn’t be tied to faux history of our country, just a fun night with food and some friends, if they can make it.

They could make it! We had a really nice evening together. I’m so glad we did it this way.

I took a part of my life back by losing the obligation to celebrate Thanksgiving Day, and it’s working for me. This is the happiest and calmest I’ve been heading into the holidays in quite some time.

I decided to go with a menu of soups and breads for maximum coziness, and, of course, desserts.

Soups were chili, chicken stew, and corn chowder. The corn chowder recipe is one I’ve posted here before, and the other two are ones I make my own way, no recipe particularly, and most everyone has a way they do those, I think. I bet you like your own way best.

Chocolate pie, a plain pie crust with creamy chocolate filling. I always use a Jello cook and serve for that.

Apple galettes, sweet butter pastry with a simple filling of apples and sugar and a little spice. I don’t use a recipe for this.

A tart with a spiced shortbread crust, and, even though I am against cream cheese in general, I was short on time and used a cream cheese filling. To top the tart, I made a mixture of fall fruits based on the recipe below. However, I doubled the sugar and used about a quarter of a cup of marmalade instead of kumquats, because I didn’t have time to track down kumquats. It was lovely. An alternate topping was spiced honey, which was honey I heated with crushed red pepper, pie spice, some extra mace and cinnamon, and some salt. I made toffee walnuts to go with that.

Fruit topping adapted from this recipe in a Better Homes and Gardens (November 2008):

Brioche buns with cinnamon-cranberry goat cheese, and in true Shin Ae fashion, I forgot to put out the goat cheese. However, it was fine because people just kept grabbing the buns and eating them plain, seemingly with no hard feelings. I should add the brioche was not true brioche, more of a brioche-themed enriched bread. I’ve never made real brioche.

So that’s what we had! It was fun and great, and the hilarious part, to me, at least, is that I cranked out all those baked goods using this oven:

I keep laughing when I think of it.

I think pasta and Brussels sprouts are a great fall and winter combination. It’s not like I thought of it, but I’m enthusiastic about it.

My poor family. I think they are maybe less excited, especially when I serve it to them more than once in a week. But, we needed to compare.

The components of each of these meals are not identical, but they’re close enough to warrant comparison of two styles.

Pasta is boiled, beans are simmered and served over top with a sprinkle of cheese. Veg is roasted and served on the side. Everyone in our house finds something about this meal to enjoy, and some even enjoy it in its entirety.

The next time, I did this casserole thing. It’s a Nigella Lawson recipe. It’s not Nigella’s fault the correct size pan wouldn’t fit in my oven and I needed to use a smaller one, thus likely rendering the final product less roasty and delicious than hers. If Nigella made it for me, I bet it would taste better. She’s just better at cooking than I am, plus I love her, and you know how that is.

It wasn’t bad, but it wasn’t for us. Once again, the sort-of constants are: potatoes (which I equate with white beans), whole wheat pasta, sprouts, Romano cheese. Extra items are: Gruyère cheese, ricotta cheese, butter, and sage.

I loved the sage. I always forget how much I love fresh sage. Otherwise, this was quite the cheese bomb. I’m typing that thinking, “Mmm, cheese bomb,” but in practice it was not what I wanted to eat. It was just so, so much cheese. Also, the recipe took much longer to prep, cook, and clean up. The consensus of the family was my usual treatment of ingredients is better for us. I may do a little fried sage topping for the white bean thing, though. That woody, camphory scent is very evocative.

Very quickly, here’s how I make the usual meal: I roast veg simply just with oil, salt, pepper, red pepper flakes, and often some garlic powder and dehydrated onion. Normally I like it all significantly more charred than it appears in the first photo, but dinner was running late.

I do the beans by heating up bacon until it’s just this side of charred, then pour in 2 cans of white beans. The seasoning is: thyme (1 tsp), sage (1/2 tsp), lavender flowers (1/4 tsp), fennel seeds (1/4 tsp), crushed red pepper (start with 1/8 tsp), a smallish handful of dried parsley, and a bay leaf. Ground black pepper, some garlic powder, and dehydrated onion, too. Everything is to taste, really, but those last three ingredients are more to taste than others. Everyone has big feelings about garlic and onions and pepper, right? Simmer it until it’s thickened and the consistency you want to put on your pasta.

That’s not going to be the best or healthiest thing you’ve ever eaten, but it’s easy and pretty fast, and it tastes just fine. There are a lot of nights to fill with dinners; it’s nice to have something quick and simple to make with pantry ingredients in a pinch.

By the way, I get my lavender flowers from Harney and Sons. Click here. Another way to use lavender flowers is as a tisane but also if you mix thyme (or tarragon), fennel seeds, salt, black pepper, crushed red pepper, and a couple lavender flowers, it’s a very good way to season a baked egg.

My older son finished high school! He’s been so busy this summer we just got around to celebrating. A few friends came over one Sunday evening and my son wanted pie, so we had pie. Well, also tarts, because I don’t know how to make that many kinds of pie.

Here’s a photo I snapped at the beginning:

A cherry tart with what is, I guess, a frangipane or at least frangipane-esque filling. I’ve been fiddling with the recipe, and I’m still not completely satisfied, but I love the concept so I have three more changes I want to try. It’s a Martha Stewart one from Long Ago: 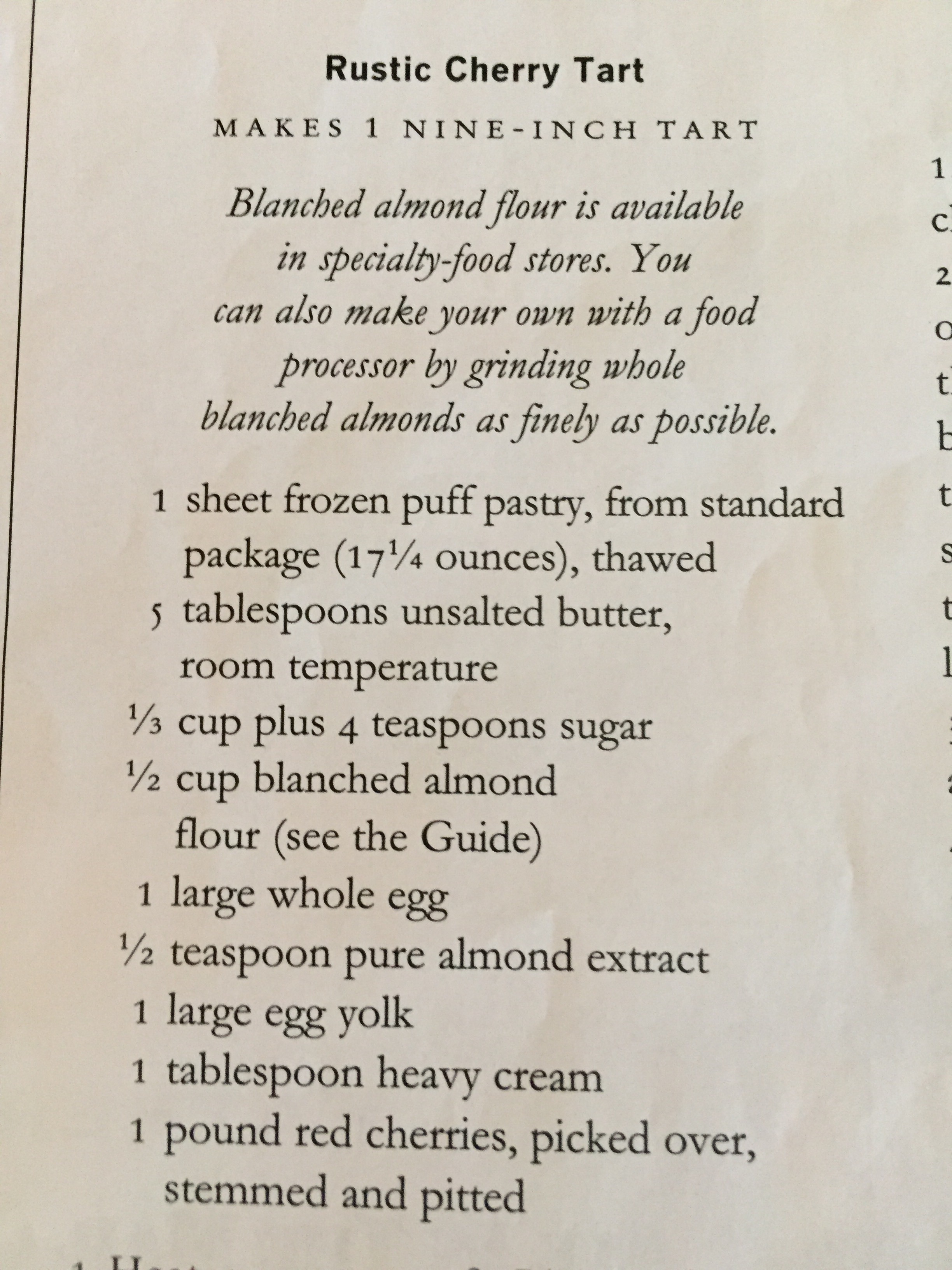 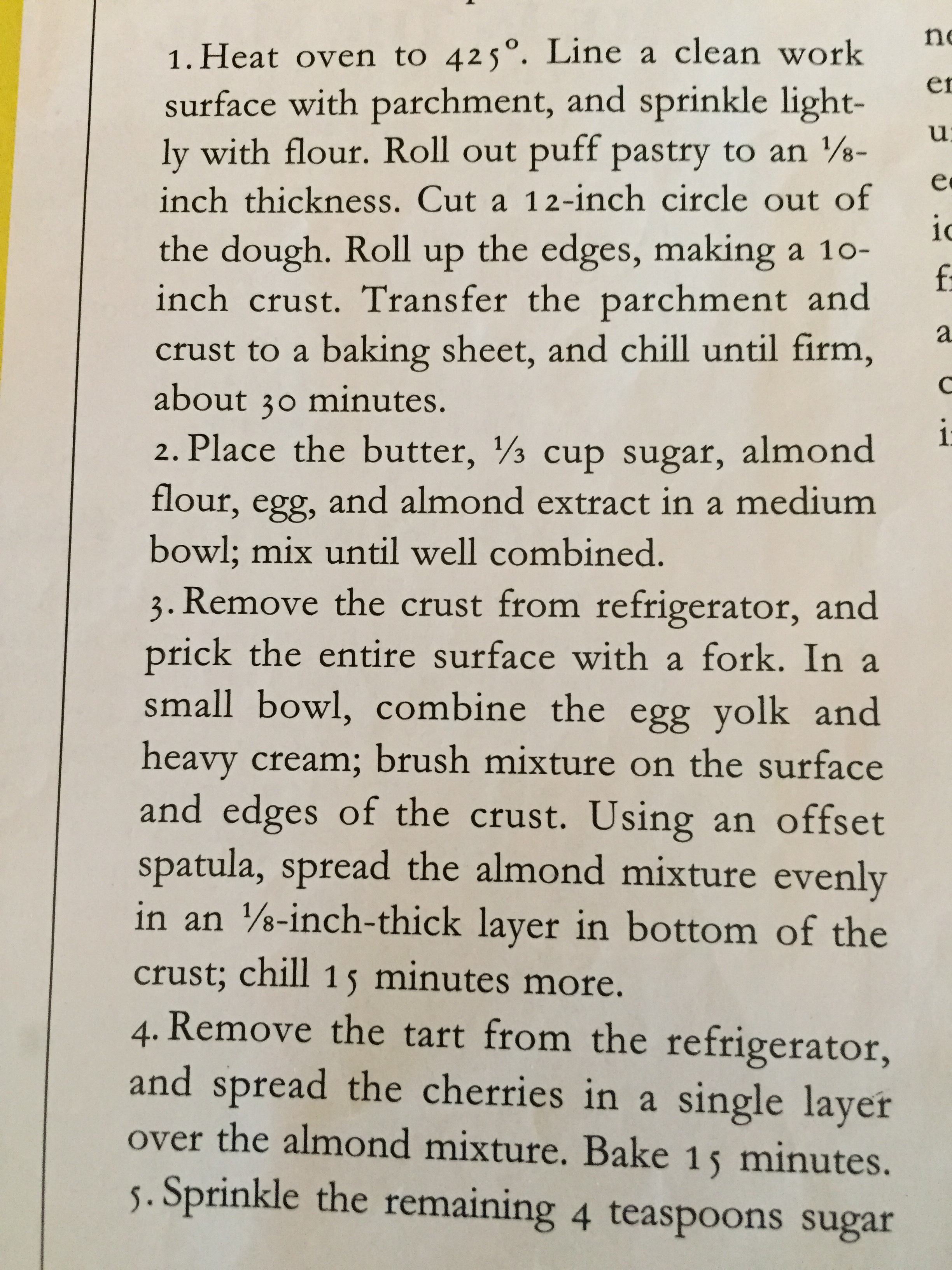 Tarte composée, this one was cookie crust filled with pastry cream and topped with sliced strawberries. Again, ancient Martha, from the archives:

The cookie crust recipe makes two tart shells, so I needed to fill the second with something. Therefore,

Lemony tart, which was a cookie crust filled with lemon semolina pudding and topped with lemon curd. The pudding recipe is from Jacques Pépin. I think, as a stand-alone food, it’s possibly the best dessert in the world. It performed nicely in the tart, but, truth be told, I still prefer it on its own. Here’s the recipe for the pudding; it’s very rich, something to keep in mind when you’re serving it: 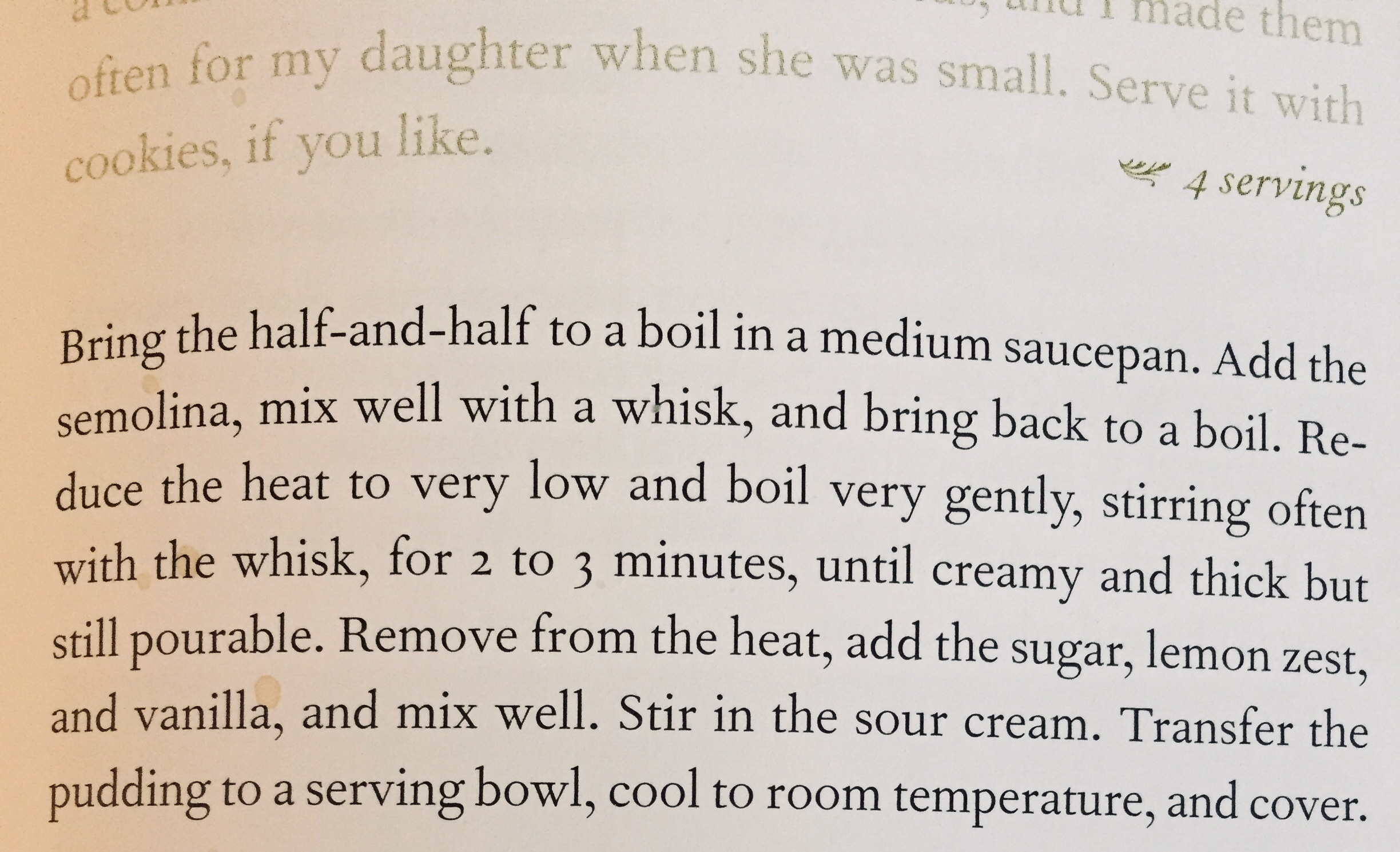 Blueberry galette, just a butter crust with blueberries, sugar, and a little cornstarch to thicken.

Chocolate pie, done in the lazy way with boxed filling, because that’s how the day went.

Also, I finished this small boat recently. It’s one of Ann Wood’s templates; you can see this one and others on her website. I copied the colors of her boat because I thought they were so pretty. For the paper mache, I used some recipes for potatoes and lines of Sappho’s, because potatoes are delicious, and who writes more perfectly about love and longing?

We eat a lot of soup, and this one always goes over well at our house. It’s a corn chowder, and I generally use this recipe, with a few minor changes.

I don’t use the butter, and often use more garlic. The thyme and parsley are dried, because it’s winter and also because I haven’t planned ahead. I use chicken stock, rather than vegetable, although I’ve made it with vegetable stock and it’s delicious that way, too. More potatoes. Frozen corn (again: winter, poor dinner planning).

This time, I made a topping for the soup, and I want to always have it that way in the future. The idea for the topping came from Sarah Britton’s blog, My New Roots. I can’t find the specific post–she has so many recipes! And I know this idea is from years ago.

As an aside, all the recipes I’ve tried from her blog have been really good. I used her idea as a template, but not an actual recipe, for this topping.

Here are the ingredients, adapted for the person who be neither shucking corn nor storming the grocery for fresh herbs tonight:

1 onion, diced, or more than one, if you want

4-6 potatoes, depending on size, peeled and diced. In this last batch, I used approximately a bag of mini potatoes. I think a bag is about a pound and a half.

Salt and pepper to taste

I follow the same basic directions, with small changes. I don’t add the cream with the potatoes, because I don’t want to boil the cream. I’m superstitious about doing that.

The short version is to saute the onion & garlic in the oil for a few minutes, then stir in the flour. Pour in the stock, and that’s when I throw in the herbs, too. And the potatoes. Crank it up to boil hard until the potatoes are falling apart, then add the frozen corn, bring it back to a boil, and let it cook a few minutes. Only after everything is cooked do I add the cream, turn down the heat, and simmer just a little while to let it all meld together. Maybe 20 minutes? That sounds right.

The topping I made has raw garlic in it, so it’s definitely not for a romantic evening. It is so, so powerfully garlicky. And delicious. I live with a provisional faith in the healing powers of garlic, and I think I feel less like I have a cold after eating this for a couple of days.

The topping is about 1 part garlic to 5-6 parts parsley, although you could have more garlic if you want. Chop both very finely, put in a bowl, and add salt to taste. Then, just enough olive oil to make it the consistency of thick pesto. I also added red pepper flakes to mine. You can do this with cilantro instead of parsley, too, and it’s really good to plop onto soup, or if you’ve got a grain & vegetable bowl you can put it on top of that, or on whatever bread you’re eating with your meal.

Hope you have a good weekend, and stay warm.